Deep in the night when you are still asleep and trying not to think about having to leave the ship, you cruise comes to an end as the slow process of docking takes place in the dark.  Here the Carnival Conquest glides to dock at Port Everglades as seen from the Hilton at the Fort Lauderdale marina.  The hotel offers some of the best views in the area of cruise ships.  Sailed on the Carnival Conquest?  Share a review and tell us about it!

Hurricane Irma is picking up speed and power.  Per our updated image here, thanks to the National Weather Service's National Hurricane Center, Irma is expected to be near or ashore in the Florida Keys and possibly the greater Miami area.  Major cruise lines are already canceling cruises ahead of time and sending ships to alternate ports ahead of time.  If you are cruising within the next two weeks you should contact your travel agent or cruise line today.

This historic SS United States will have a new owner and more remarkably could return to service after more than 40 years of waiting.  Crystal Cruises has taken out an option to buy the ship with the intent being to renovate the vintage ocean liner and Blue Riband holder.  Hurdles remain however as the ship will require hundreds of millions in work and years of effort to ply the seas again.

Celebrity pushed forward with Uniquely Celebrity Tours in 2015.  The up-scale cruise line, part of the Royal Caribbean family, introduced the customizable and exclusive excursion program and it continues into 2016. 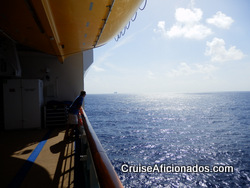 The Zika virus was known well before the current and spreading outbreaks pushed it into the headlines.  However with concerns growing the major cruise lines including Carnival, Royal Caribbean, Norwegian and their affiliated brands are offering pregnant women the ability to move their bookings to itineraries outside of at-risk areas or to later dates.

Areas in which the U.S. Centers for Disease Control have issued warns about include the U.S. Virgin Islands and Puerto Rico, Mexico and the Dominican Republic.  If traveling to those areas women are strongly urged to take measures to avoid mosquito bites which are the primary way in which the Zika virus is transmitted.  Cases of Zika have been reported in both Los Angeles county in California and in Minnesota.  The virus causes microcephaly in babies, most commonly associated with the deformed heads and thus greatly reduced brain size in the suffering children.

In addition to speaking to their cruise lines, those with air travel reservations ought to be aware that United and American are also extending options for changing travel plans.