The Cruise Industry Shifts Focus to West to the Far East, Down Under.

The odds are that you have heard of the Quantum class of ships from Royal Caribbean.  Those odds are increasingly better than those of actually cruising on one of the new ships.  That is because like much of the cruise industry, Royal Caribbean International is keenly focused on staking out territory within the fast growing Asian cruise market.

Travelers Dominion - travel with us!

Travel, we know you love to do it!  Work, you know you hate to have to do it.  Let Travelers Dominion take care of the heavy lifting and make your next trip extrodinary!  Learn more about our services!

"Love Boat soon will be making another run
The Love Boat promises something for everyone
Set a course for adventure!"
~Charlie Fox / Paul Williams 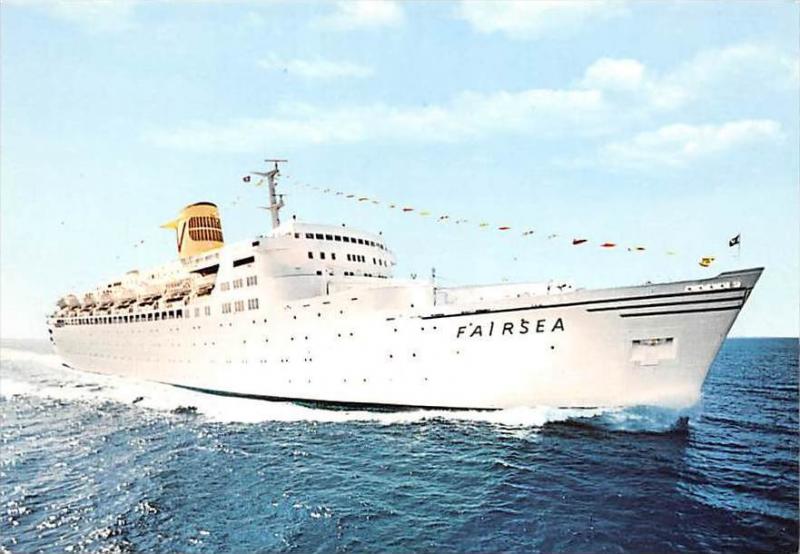 One of my favorite TV shows to watch when I was having sleep-overs at my grandparents or great aunts house was the Love Boat. Another Aaron Spelling gem with corning plots and ensemble casts of guest stars I recognized from watching entirely too many old movies and "re-runs." The implied maturity of some things was utterly lost on my young mind. I was more interested in the ship, captains table dinners, etc.

In 1983 friends of my parents took us to the cruise terminal at the Port of Los Angeles. They had taken a honeymoon cruise aboad the Sitmar Line "Fairsea." The Fairsea was a Saxonia class ocean liner built by Cunard in the 1950s. She was intended for passenger trade between the UK and Canada. Like most ocean liners she was sold and rebuilt as a tropical cruise ship.

Fairsea was moor at the east terminal. Back in those days you could actually walk right onto a cruise ship without passing through any security, which is exactly what we did. For the next four hours we walked all around the ship, even visiting the stateroom my parents friends had staid in. Years later when I learned what "turn around day" was like for the crew I understood the curiously unhappy look the steward gave as six people showed-up while he was stripping bed sheets off the bed.

Over the four hours we were on the ship I saw every public space, bar and even the small arcade for the kids.

It was standing outside leaning on a wide teak wood railing along the lowest pool deck that hooked me on cruising. The railing was warm though not hot from the sun. There was a cool breeze. And looking out over the water around the port I decided I wanted to take a cruise. Everything around me just resonated.

The day ended with walking around the late "Ports-o-Call" shops south of of the terminal. There, we ate dinner at a restaurant seated at a table along the waters edge. Around five p.m. the Fairsea, brightly lit, sailed by. Half an hour later, none other than the Pacific Princess passed by, her white paint seeming to glow. Hanging along the side all the way to the waterline was a mass of streamers from the traditional send-off celebration. It was like seeing a childhood myth emerge from a TV screen. It was a real ship, there really was a Pacific Princess. That I knew the show was mostly filmed on sound stages was beside the point.

My first cruise would not come until August of 1999, but that day was the time and place which hooked me on cruising.

"If it doesn't move, it's a hotel." - The Royal Caribbean Fan 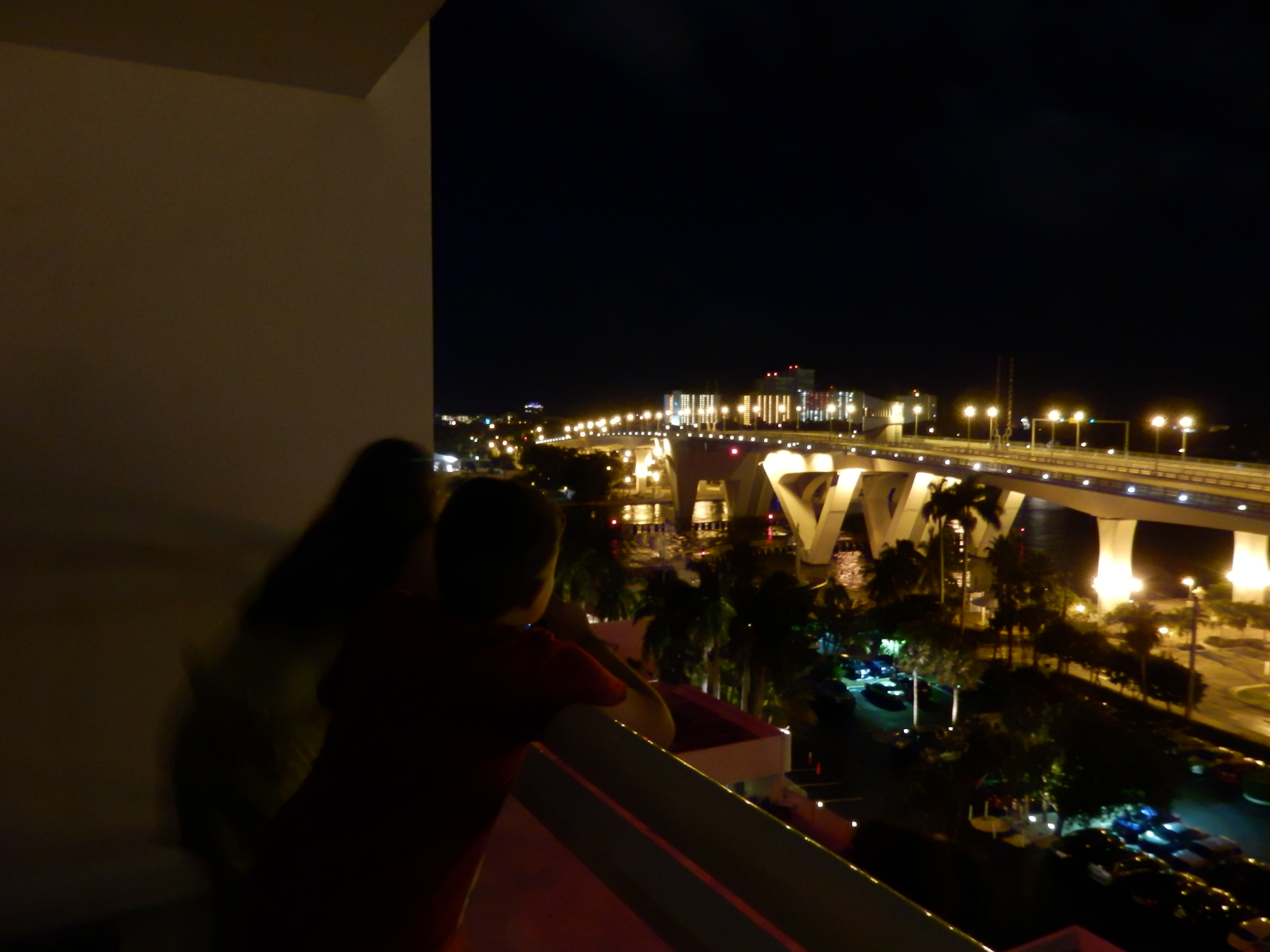 It was scarcely 5:30 in the morning, the October morning sky was still pitch black. The Hilton Fort Lauderdale Marina afforded a sweeping view of Port Everglades, the 17th Street draw bridge and beyond them the condo lined channel leading to open water. Bleary eyed I managed to drag myself to the balcony and turn on my camcorder then flop in a chair. My son and daughter surprised me entirely by waking up as though it where Christmas morning. Ben emerged first and marveled at the twinkling cityscape. Vicky, two years his senior came out next. The show I had promised them for weeks could be seen at the two mile bouy outside the channel. The Oasis of the Seas was holding station awaiting the harbor pilot, her bow facing the port. With all the lights forward of the bridge dark while at sea she was almost invisible. The ship began to make her way into the channel. Midway in the channel the Oasis slipped behind a block of condos and hotels. Vicky asked again where the ship was and her brother pointed to the condos and replied "If it doesn't move, its a hotel." 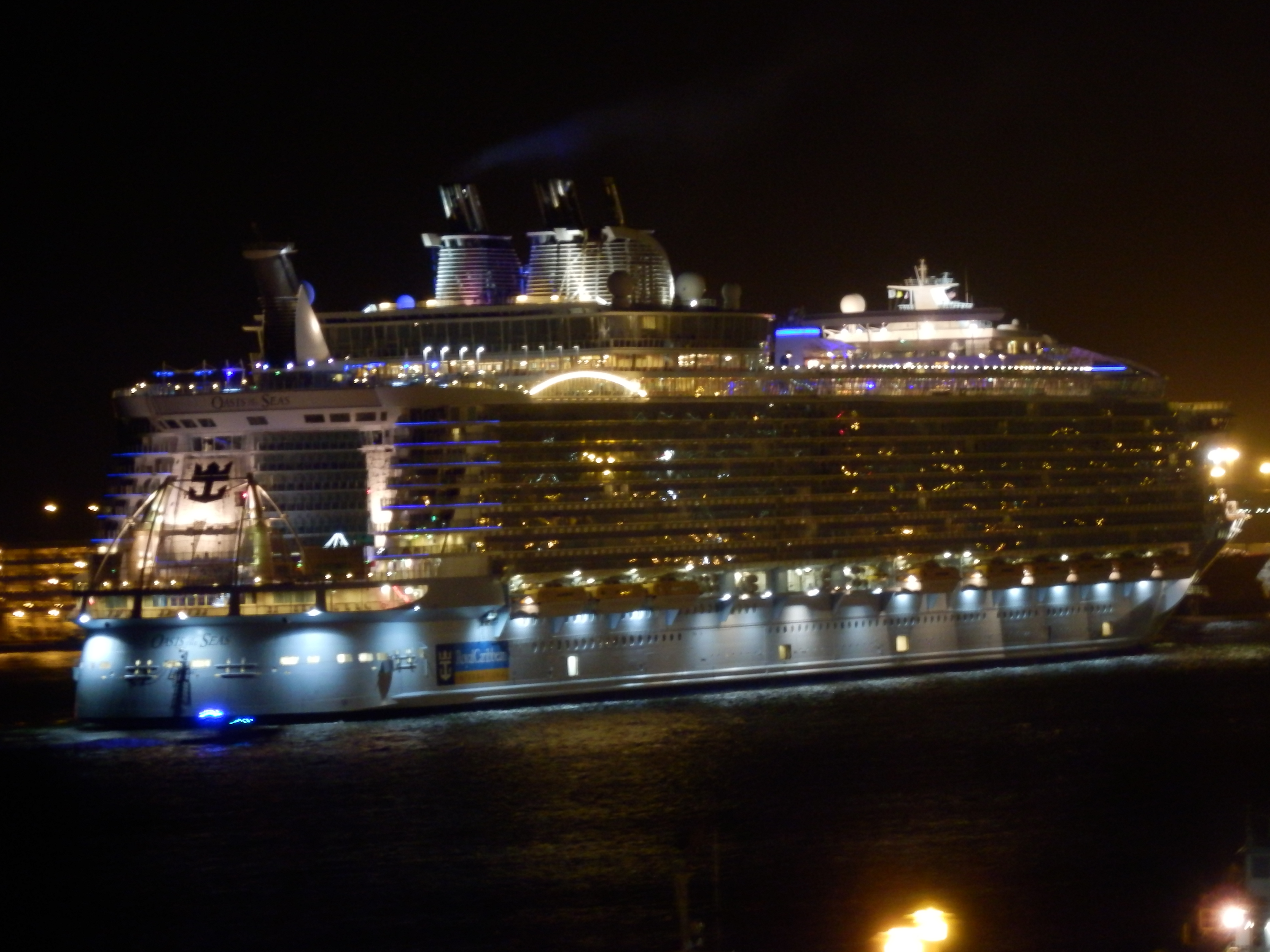 The morning ahead would be the culmination of decades of following cruise travel that began with scouring old editions of Sea Classics, touring historic ocean liners to watching the Love Boat depart the Port of Los Angeles. The adventure that started two days ealier as we began our drive to Florida was more than just a family vacation.  Here I was about to have the classic "family vacation" but also share a deep personal love for cruising.

In 2019 Royal Caribbean International began to celebrate its fiftith anniversary.  The first scratch built cruise line, which decades earlier had eletrified the emerging industry with the first purpose-built caribbean cruise ships sailing out of Miami was the first I sailed on.  During the next year I am going to share my experience of cruising and how from that I began the Royal Caribbean Fan in 1999 from a single HTML webpage.  I hope you enjoy the journey as much as I have living it.

The Sum of All Pitches: Travel Give-aways Judged. 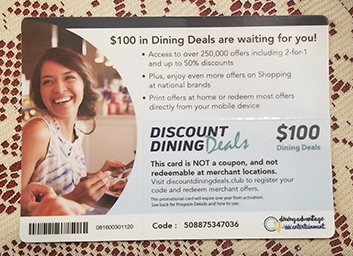 Not worth the plastic it was printed on.

What of the product the company was selling? Was the company legitimate? Is anything they sell worth anything to anybody? Is it a scam? Researching the company and details reveals several things. First, in the strictest legal definition the company and its product are not a scam. It is the very precise way everything is presented and how the contracts are written that keep this company from straying into legal trouble. For some people who can afford to buy and deal with the limitations and complications that seem systemic to this sort of product it can be a favorable arrangement. However for many people these situations can be problematic commitments of money which they are never able to gain the promised travel.

The most telling thing to my mind was that the walls of the office are coated in pictures of people when they buy the memberships. Yet there are none of people at any of the travel options the membership provide. Indeed, we were told repeatedly that we could not and would not be able to review a sampling of the travel options. I can find nobody online blogging about their latest travel club trip. And in truth I can find virtually nobody who will openly admit they have such a membership. Likewise, in reading about those who bought and later attempted to get out of their contracts, virtually nobody does.

Are there alternatives to these clubs that provide the sort of travel options and value but without the financial strain and obligation? Absolutely. The entire premise of this companies product was that it gathered endless options for travel at prices only possible for the reasons they explain to you. Yet most travel agencies and agents can book through wholesale companies and through industry promotions that give you every means to travel when you want and the way you want too.

Do I have a horse in this race? Certainly, but so do you. These companies have a choice to present things professionally and without pressure or masking the insanity of their self-serving contracts and financial systems. Shop carefully, ask questions.

Have you dealt with timeshare pitches? Share with us in the Travelers Dominion forums!