MSC will port the first of the Seaside class at Port Miami when the lead ship comes online in late 2017.  Projected to carry an estimated 4,140 passengers the ship represents the latest and boldest move by MSC to build its presence in the north American cruise market.

The design of the Seaside is innovative in ways normally seen only among the Royal Caribbean fleet.  The Seaside will live up to her name by introducing a wide and close to the water pool deck aft, along with generous promenade space along the sides of the ship.  At a time when ship design is increasingly turning passenger attention away from the ocean the Seaside embraces it in bold fashion.  Some bemoan the growing size of cruise ships but like the Voyager, Freedom and Oasis classes, size does bring the means to create environments at sea unlike any before them.

Previously MSC has featured the Divina in marketing to north American cruisers.  Where the MSC Divina is a highly regarded but very conventional design, the Seaside class will  the Seaside will represent a true "signature" ship to define the public's mental image of the line.  Her placement at Port Miami also represents a very high profile location at a time when the busiest cruise port in the world is experiencing a surge of new ships and lines as well as the return of lines as Cruise Aficionados reported earlier this week.

Costa to build two for China-

Costa has secured an agreement with Fincantieri, the Italian shipbuilder, to build two ships for 2019 and 2020.  Each carrying 4,200 passengers they will surely mean the ship is a follow-on to the Vista class Carnival has begun to deploy.  These news vessels will sail out of China and designed for that market specifically.  If Costa retains the existing ships deployed in the Chinese market it will have five.

MSC Cruises will build a minimum of two and possibly up to four liquefied natural gas powered cruise ships, each with exceeding 200,000 gross tonnes and carrying over 5,400 passengers.  To be built by STX France at a cost exceeding four billion dollars, they will begin to enter service in 2022.

Star Clippers Get The Wind-

It isn’t a Dutchman, but the Flying Clipper will join her four other sail driven sisters in the Star Clippers fleet.  Carrying an modest 300 passengers the ship will be the largest among the sailing ships the line offers.  She will enter service in 2017.

Norwegian Cruise Line will launch the China based Norwegian Joy in just under a year.  The ship will introduce a new feature, unique in the arms race of innovation driving the industry.  For the first time a go-kart track and cars will become “a thing to do” at sea.

The new Vista class set sail with it’s own contribution to the list of things you can do at sea, featuring the first IMAX theater at sea.  However for those especially keen on enjoying a drink, Carnival has partnered with Concrete Beach a craft brewer based in Miami.  They will guide the creation of unique brews on the ship itself, rather than stocking a shore-bottled beverage.

Cunard Queens to circle globe together. 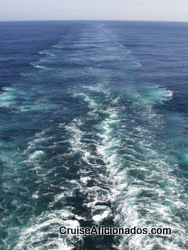 On January 10, 2016, the three “Queens” of Cunard will leave Southampton for a five month journey together around the globe.  Cruise ships Queen Elizabeth, Queen Victoria will sail with purebred ocean liner Queen Mary 2 and return to return to the UK May 10, 2016.  Their itineraries will vary, each visiting slightly different ports of calls in many cases.  However all three will remain in the same region as they progress through Asia and back to Europe.